The president of Brasil, Michel Temer, signed on this Friday(16) a decree to a federal intervention in Rio de Janeiro, according to the president, the situation is out of control. The decree had the approval of the state’s governor, Pezão.

After months in intense war agains the traffic, the president signed the decree to the federal intervention in the state of Rio de Janeiro, the decree aims to give powers to the army so then they can combat traffic and gang wars. According to to specialists, its about putting one Ministry only to command all the operations against the traffic. 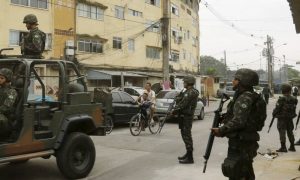 On this Monday, already in a command of the army was claimed how many shootings and deaths were in the slum of Rio de Janeiro.

Still this decree will go through straight vote in the deputies and senators chamber on Monday and Tuesday, and will be approved or reproved as simple majority.