Driver affirms: “The van flipped over because it got scared with the gas price.” 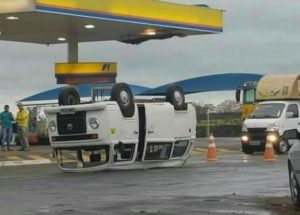 In The interior of Rio de Janeiro on Friday(16), driver crashes his van coming to the gas station and almost hurts pedestrians.Witnesses said “he came in high speed, couldn’t stop and crashed.”

According to the police, the driver had signs of drunkenness and denied to do the  breathalyzer. Interviewed by our team, Antônio denied all the stories told by the witnesses and affirms: “The van flipped out because it got scared with the gas price.”

Brought to the 34th Police Department of the Military Police, the violator confirmed that had drank and lost the van’s control, but continued to affirm that his car have own life. After released, relatives told that Antônio had psychologic problems and he couldn’t drive.