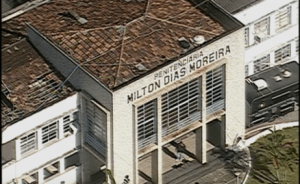 Milton Dias’s prison in Japeri/Rio de Janeiro entered in rebellion yesterday(18) and the prisoners did four penitentiary agents of hostages using one pistol and two revolvers. The prisoners goal was to use them to escape.

The rebellion ended at 1am of this Monday. The police made a deal with the penitentiaries, however it wasn’t clear which were the negotiations.

The Minister of Public Safety alerted 54 prisons, and put all of them in maximum safety alert.